(RNS) — Over the past few years, our faith communities in North America have been brought together largely through trauma: attacks at Mother Emanuel AME Church in Charleston, South Carolina; the Tree of Life synagogue in Pittsburgh; a Quebec mosque; the Sikh temple outside of Madison, Wisconsin; and most recently in London, Ontario, against a Muslim family.

Islamophobic, antisemitic and other bigoted attacks have been rampant, and certainly not only restricted to our places of worship. Many victims have been murdered in public in unprovoked attacks while going about their daily lives, dining at restaurants or, as in the London case, out for an evening walk.

Some, such as Deah Shaddy Barakat, Yusor Mohammad Abu-Salha and Razan Mohammad Abu-Salha, three young Muslims in Chapel Hill, North Carolina, have even been killed in their homes. I would be remiss to not mention the numerous victims of police violence such as Botham Jean and Atatiana Jefferson in Dallas-Fort Worth, where I live, whose deaths horrified us all.

RELATED: Al-Aqsa attacks harmed the mosque, but long-term cost will be Palestinian anger

What the violence has ushered in for many of us are routine messages of support, news conferences of condemnation and expressions of solidarity from politicians and faith leaders across the spectrum — almost expected courtesies of sorts that haven’t actually slowed down the violence itself. Yet politicians still decorate their resumes and campaign speeches with their symbolic support of targeted communities to portray themselves as champions of inclusivity.

Worse yet, many of those same politicians and faith leaders seem to have no problem employing the same violent tactics against these communities globally. 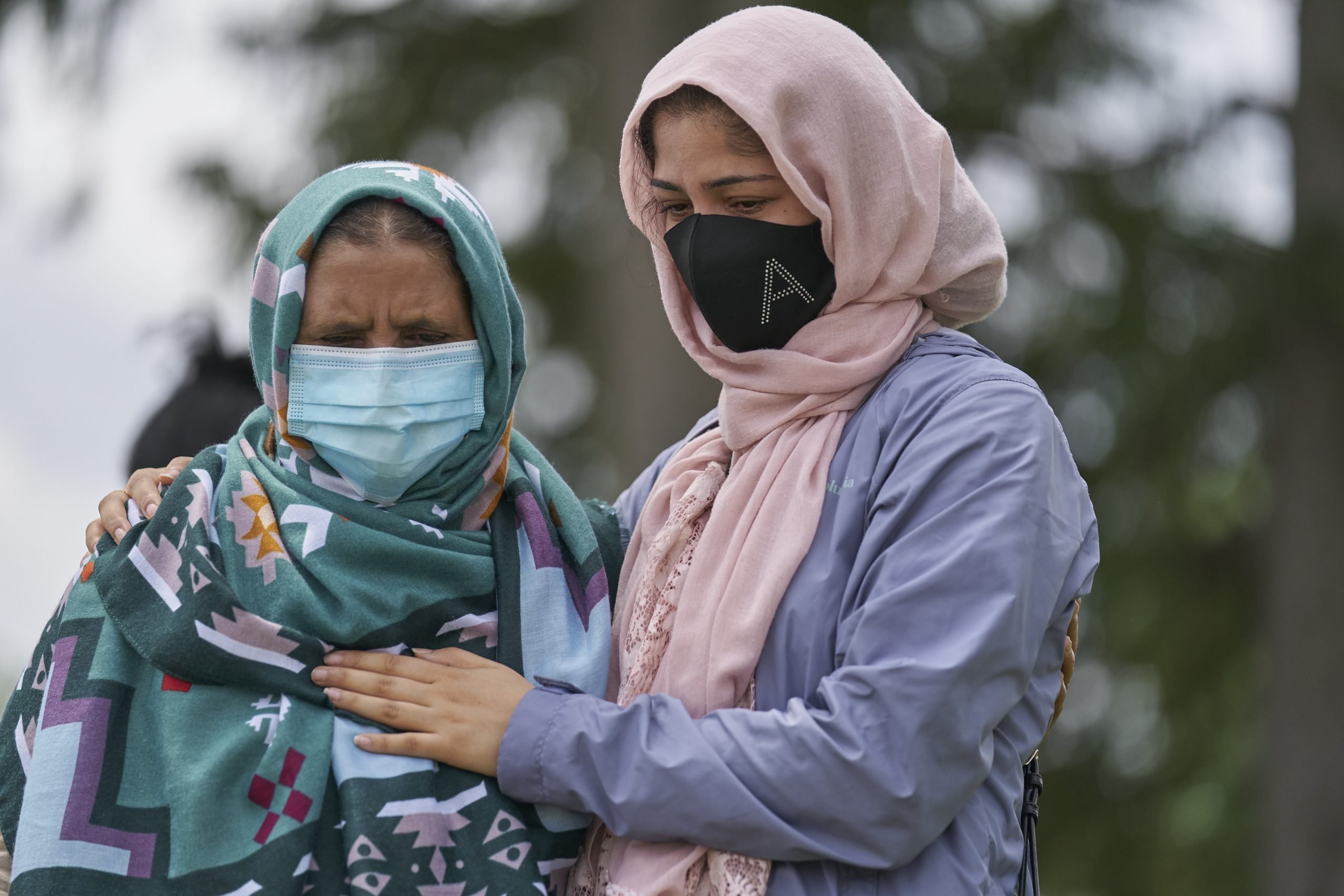 Khalida Ashram and her daughter, Anila, mourn at the scene of an attack involving a driver accused of plowing a pickup truck into an immigrant family of five in London, Ontario, June 8, 2021. (Geoff Robins/The Canadian Press via AP)

As I wrote when President Joe Biden won election in the fall, pleasant rhetoric doesn’t undo horrific policies and in fact may even perpetuate them. While Biden ended the Muslim travel ban, he certainly hasn’t stopped the bombs over Muslim heads in places like Yemen and Palestine.

American weapons still obliterate Muslim children in different parts of the world, with no accountability. There is a moral discrepancy in claiming to be opposed to anti-Muslim bigotry domestically while easing the way for anti-Muslim violence abroad, or justifying it on religious grounds, as some American faith leaders do.

This moral discrepancy is always most pronounced when it comes to the Palestinians, a fact that has become ever more apparent and tiresome to the Muslim community.

Over the past few months, Israeli state violence against Palestinians has peaked to the point that Palestinians are now facing the largest violent displacement from their homes since 1967. Much of the American public is seeing for the first time what Palestinians have been trying to expose for years.

We’ve all seen the images of racist Israeli settlers marching under full state protection in what is internationally recognized as illegally occupied territory in East Jerusalem, chanting genocidal slogans. Palestinian men, women and children, meanwhile, have been brutalized, shot with tear gas and rubber bullets, and illegally detained merely for holding up a Palestinian flag.

The continued expansion of illegal settlements has forced Palestinians from their ancestral homes while forcing them to pay the cost of demolition. Israel’s degrading checkpoints cage Palestinian workers trying to maintain whatever they can of their livelihoods, to provide for their stateless families who seemingly have no future. Images of police brutality turn children into hashtags and faded smiles. 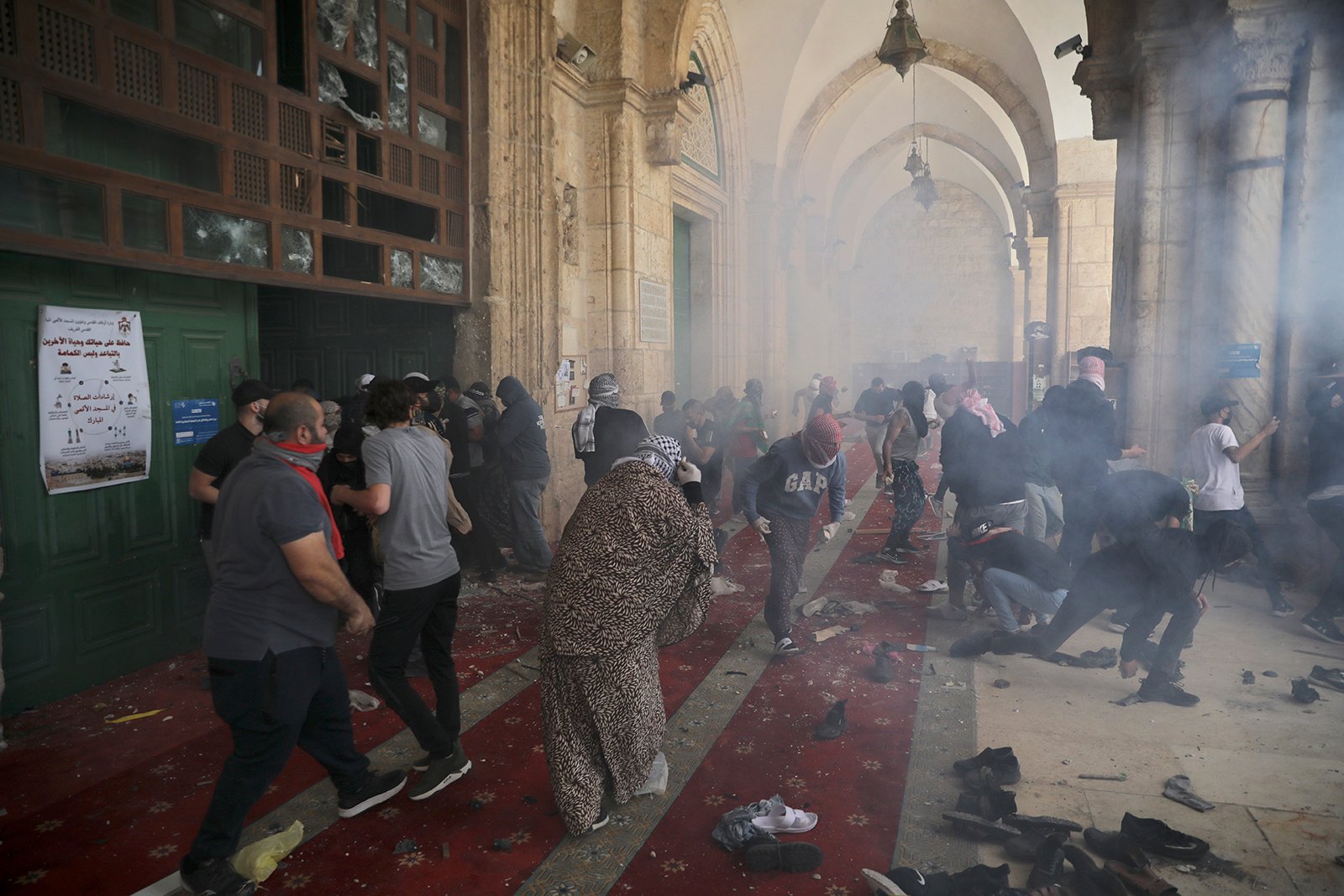 Palestinians clash with Israeli security forces on May 10, 2021, at the Al-Aqsa Mosque compound in Jerusalem’s Old City. (AP Photo/Mahmoud Illean)

And what could be more Islamophobic than the attacks on the Al-Aqsa Mosque, one of Islam’s holiest sites, on the 27th night of Ramadan, one of the holiest nights in Islam? The spraying of foul chemicals to disperse Palestinians from a traditional gathering place near Al-Aqsa was meant to humiliate worshippers further.

The images of the 60-plus children who lost their lives during the carpet bombing of Gaza seem to have struck a chord. They are too difficult for many people of conscience to bear, just as they were horrified by Charlottesville, kids in cages at our borders, places of worship being vandalized in our cities and Black lives being stolen by our police forces.

Against these images, claims that the Israel-Palestinian conflict is “more complex than that” are no longer excusable.

Apartheid is not a subjective term, but a legal one that describes perfectly what Israel is guilty of. Human Rights Watch, the largest human rights organization in the world, and Israel’s own human rights group, B’tselem, have designated Israel’s occupation as apartheid. It’s also considered as such by those who fought apartheid in South Africa, and even former Israeli ambassadors to South Africa. The bigotry faced by the Palestinians under occupation is legally established and lethal.

Yet somehow, Palestinians, expecting solidarity, are met with silence or worse from those from whom we’d expect better.

In Canada, Prime Minister Justin Trudeau and his government spent June putting out statements of support for Israel and erasing Palestinians. But when the London attacker, in a premeditated assault, left four people in a single family dead, with one child survivor, the prime minister and government officials readily condemned it as Islamophobia and attended the vigil for the victims. People attend a memorial at the location where a family of five was hit by a driver in London, Ontario, on June 7, 2021. Four members of the family died and one is in critical condition. A 20-year-old man has been charged with four counts of first-degree murder and a count of attempted murder in connection with the crime. (Brett Gundlock/The Canadian Press via AP)

This shows the blind spot Trudeau and so many who condemn bigotry against Muslims have when it comes to Palestine.

If Islamophobia is wrong here, then it’s wrong there too. We can no longer accept that those who count themselves as our allies against anti-Muslim bigotry at home employ the same biased tropes, framing and tactics to dehumanize Palestinians, Muslim or otherwise, and deprive them of their basic human rights. Our dismantling of racism must be global.

Recently, 300-plus Jewish leaders put forth a powerful statement that insists that we view the fight against antisemitism and for Palestinian liberation as one struggle. We would all be wise to heed their call.