(RNS) — A Southern Baptist youth minister who also served as a National Guard chaplain was arrested last weekend on charges of soliciting a minor, according to the Tennessee Department of Investigation.

Matthew Brewer of Centerville, Tennessee, was one of 18 men arrested during a sting operation in Spring Hill, Tennessee, south of Nashville. All had allegedly responded to advertisements placed by undercover police, designed to identify “those seeking commercial sex acts with minors.”

Brewer is a youth minister at Fairfield Baptist Church in Centerville, Tennessee. The church did not respond to a request for comment. But after the arrest, Brewer’s name and photograph were removed from the church website.

In a statement, the church told WKRN, an ABC news station in Nashville, that the church is “shocked and saddened” by the news of Brewer’s arrest and is working with law enforcement.

“The content of what was shared with us is not aligned with our Biblical values,” the statement read. “We met with our church family Sunday to share what little we knew, and our youth minister has been suspended indefinitely from his duties and the church campus pending court proceedings.”

Officials with the Tennessee Military Department also told the station that it was aware of the arrest and is cooperating with law enforcement. 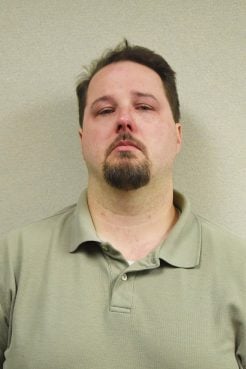 In an unrelated case, David Nims, a volunteer youth director at a Florida Baptist church, was arrested twice in June — once for allegedly placing a hidden camera in a church bathroom and a second time for possession of child pornography, according to Baptist Press.

The pastor of Calvary Baptist Church in Pensacola told a Florida television station it was cooperating with law enforcement and was “ready to provide care and ministry” to anyone affected by the situation.

RELATED: In newly leaked letter, for SBC ethicist Russell Moore says that pushback over abuse, racism led to his resignation

The issue of sexual abuse has dominated conversation in the SBC since a 2019 investigation by the Houston Chronicle identified hundreds of cases of abuse and named a number of churches that employed sex offenders. The series led to a call from then-SBC President J.D. Greear to expel churches that covered up abuse as well as a public lament for abuse at the denomination’s 2019 annual meeting. Former Southern Baptist ethicist Russell Moore has claimed Southern Baptist leaders resisted efforts to address abuse.

Last week, newly elected SBC President Ed Litton announced the details of a task force that will oversee a third-party review of how the denomination’s Executive Committee has handled allegations of abuse.

Liz Evan, a Clarksville, Tennessee, attorney who was named to the SBC task force, advocated for a new state law that makes it a felony to “engage in sexual contact with anyone they treat for an emotional, mental or physical condition,” according to The Tennessean newspaper.

Evan told The Tennessean the new law applies to pastors. She became involved in pushing for the law after a candidate for senior pastor at her former church was alleged to have a history of abusive relationships.

“Clergy members all need to know that they’re going to be held accountable for misusing their power,” Evan told The Tennessean.