(The Conversation) — Israel’s former ambassador to the U.S., Ron Dermer, made waves in May 2021 when he publicly suggested that Israel should prioritize its relationship with American evangelicals over American Jews.

Dermer described evangelicals as the “backbone of Israel’s support in the United States.” By contrast, he described American Jews as “disproportionately among [Israel’s] critics.”

Dermer’s comments seemed shocking to many because he stated them in public to a reporter. But as a historian of the evangelical-Israeli relationship, I didn’t find them surprising. The Israeli right’s preference for working with conservative American evangelicals over more politically variable American Jews has been evident for years. And this preference has in many ways paid off.

Christian Zionism in the Trump era

American Christian Zionists are evangelicals who believe that Christians have a duty to support the Jewish state because the Jews remain God’s chosen people.

During the Trump years, Christian Zionists were crucial allies for former Israeli prime minister Benjamin Netanyahu’s government. They helped Netanyahu lobby Trump for the relocation of the U.S. embassy to Jerusalem, as well as the withdrawal of the U.S. from the “Iran Deal” – the international nuclear arms control agreement with Iran.

These evangelicals also backed Trump’s recognition of Israel’s 1981 annexation of the Golan Heights, as well as cuts of more than US$200 million to American funding for the Palestinian Authority in 2018.

Coming after this string of policy victories for the Israeli-evangelical alliance, Dermer’s comments made sense.

However, the alliance’s future may be in doubt. Recent polling shows dramatic declines in support for Israel among young American evangelicals. Scholars Motti Inbari and Kirill Bumin found that between 2018 and 2021, rates of support fell from 69% to 33.6% among evangelicals ages 18-29.

While these polls speak most immediately to the current context, they also underline a larger historical point: Evangelical support for Israel is neither permanent nor inevitable.

The Southern Baptist Convention – long the denominational avatar of white American evangelicalism – offers an example of how these beliefs have shifted over time, which I examine in my book “Between Dixie and Zion: Southern Baptists and Palestine before Israel.”

Southern Baptists are broadly supportive of Israel, and have been for much of the past half-century. Baptist leaders like W.A. Criswell and Ed McAteer helped organize Christian Zionism in the U.S. The Southern Baptist Convention itself has passed a number of pro-Israel resolutions in recent decades.

More recently, Southern Baptist support for Israel was highlighted when the Trump administration invited Robert Jeffress, pastor of the First Baptist Church in Dallas, to lead a prayer at the opening of the U.S. Embassy in Jerusalem in 2018.

However, Southern Baptists were not always so unified in support for Israel, or the Zionist movement that led to its creation. This was evident only days after the establishment of Israel in 1948, when messengers to the convention’s annual meeting repeatedly and overwhelmingly voted down resolutions calling for the convention to send a congratulatory telegram to U.S. President – and fellow Southern Baptist – Harry Truman for being the first foreign leader to recognize the Jewish state.

Zionism was ‘God’s plan’ – unless it wasn’t

This seems shocking today, after years of seemingly unanimous evangelical support for Israel. However, as I document in my book, Southern Baptists had diverse views on Zionism and “the Palestine question” in the decades leading up to Israel’s birth. While some did argue that support for the creation of a Jewish state in Palestine was a Christian duty, others defended the Arab majority’s rights in the Holy Land. 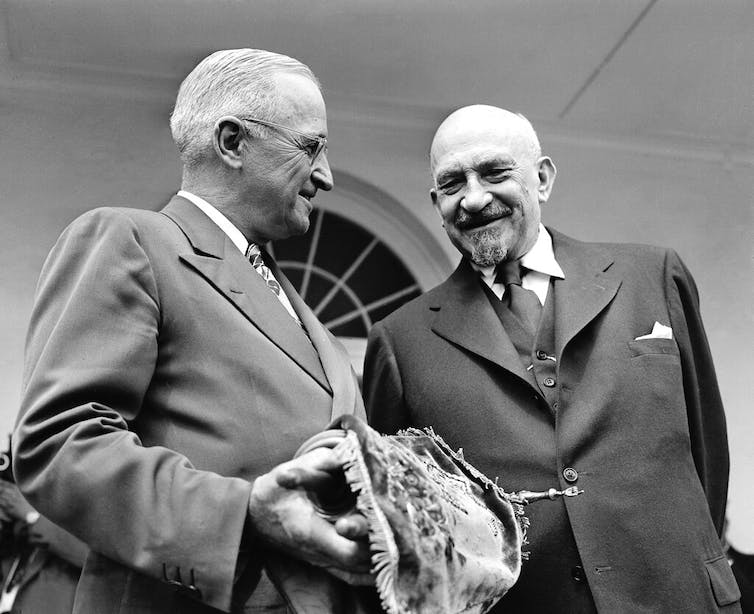 The Southern Baptist Convention refused to congratulate President Harry Truman for being the first world leader to officially recognize the establishment of the State of Israel in 1948, even though he was one of their own. At right is Chaim Weizman.

During this era, the Southern Baptist Convention published books, pamphlets and other materials reflecting both sides. In 1936, its press published a work by missionary Jacob Gartenhaus, a convert from Judaism to evangelical Christianity, arguing that to be against Zionism was “to oppose God’s plan.” The following year, however, the press published a mission study manual by J. McKee Adams contending that “by every canon of justice and fair-play, the Arab is the man of first importance.”

Adams was one among a coterie of professors at Southern Baptist Theological Seminary who spoke out against what they sometimes derided as “Christian Zionism” – then an unusual term.

Even evangelicals who believed the Bible anticipated the return of Jews to Palestine disagreed on whether the Zionist movement was part of God’s plan.

The influential Baptist leader J. Frank Norris of Fort Worth, Texas, who broke away from the mainstream Southern Baptist Convention in the 1920s, argued in the 1930s and 1940s that Christians had a duty to God and civilization to support the Zionists.

But there was no widespread sense that being a Baptist – or an evangelical Protestant – entailed support for Zionism. John R. Rice, a prominent disciple of Norris’, rejected his mentor’s arguments outright. “The Zionist movement is not a fulfillment of the prophecies about Israel being restored,” Rice wrote in 1945. “Preachers who think so are mistaken.”

Regarding the political question of whether Arabs or Jews should control Palestine, most evangelicals were unconcerned. The Southern Baptists focused on other priorities in the Holy Land, such as the growth of their missions in Jerusalem and Nazareth. Even those Baptists who supported the establishment of a Jewish state did not organize politically around the issue.

The future of Christian Zionism

In the decades after the establishment of Israel, however, motivated evangelical and Jewish activists – as well as the Israeli government – worked to stitch together the interfaith relationships, build the institutions and spread the ideas underpinning today’s Christian Zionist movement. These efforts have been remarkably effective in making support for Israel a defining element of many evangelicals’ religious and political identities.

However, as the latest polling of young evangelicals shows, there is no guarantee this will be permanent. This diverse and globally connected generation of evangelicals has its own ideas and priorities. It is more interested in social justice, less invested in the culture wars and increasingly weary of conservative politics.

Young evangelicals remain to be convinced of Christian Zionism. And they very well may not be.

Walker Robins, Lecturer in History, Merrimack College. The views expressed in this commentary do not necessarily reflect those of Religion News Service.