(RNS) — Vickie White Nelson, 49, has deep roots in southern Maryland. Her ancestor, Regis Gough — her mother’s great-great-grandfather — was enslaved on a plantation there owned by Jesuits and is listed among the Georgetown University 272, a list of enslaved persons the Jesuits sold to Louisiana plantations. But for some mysterious reason, Gough escaped being shipped west.

“He was supposed to earn his freedom after 12 years, but he did not,” Nelson said.

Nelson has been volunteering, along with several other descendants of the GU272, at an archaeological dig on the former plantation where Gough was enslaved. St. Inigoes, in St. Mary’s County in southern Maryland, is close to two other plantations, Newtown and Bohemia. Historians believe enslaved workers moved between these plantations fluidly.

Nelson has observed excavations at Newtown plantation before, she said, but this one at St. Inigoes was different.

“I liked this dig,” said Nelson, who spent three hours one morning shoveling and sifting through the dirt for artifacts. “They actually let us participate.”

It was a moving experience, she said.

The two-week dig, which began June 28 at St. Inigoes, is being led by two anthropology professors, Laura Masur, of the Catholic University of America in Washington, D.C., and Steve Lenik, of St. Mary’s College of Maryland. Masur said their goal for the dig was to find a former chapel on the site and, if possible, the former slave quarters. But the houses where the enslaved workers lived, Masur said, are difficult to find.

“Often sites that are seen as least important are the ones that are not preserved as well,” said Masur.

While public archaeology often makes space for members of the community, communal involvement is rarer in academic endeavors like Masur’s. But Masur wanted the descendants and members of the southern Maryland community to be involved in the dig. She said about a dozen descendants have come out onto the site during their time at St. Inigoes.

“It’s deeply meaningful for a lot of people to come out here,” said Masur. “They can make of this what they wish to make of it rather than me telling them how they’re supposed to think and feel about it.” 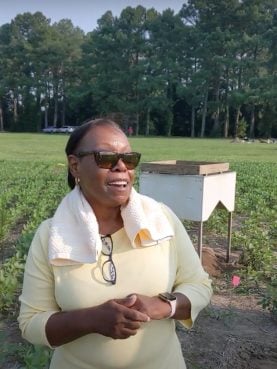 Angela Wilson discusses her interest in and connection to an archaeological dig at a former plantation in St. Inigoes, Maryland. Video screengrab

In fact, their presence and involvement inform how Masur conducts her own research. “It makes me reflect more on my own research questions: Are my questions useful, interesting and respectful to this community?” Masur said.

Angela Wilson, 62, is another descendant volunteering on the dig. She heard about the St. Inigoes dig when Masur posted about it on a Facebook group for GU272 descendants living in southern Maryland. This is her first dig. She has spent several mornings shoveling through dirt. On her first day, she found a piece of brick. It may have been part of a chapel, she said, adding that these archaeological digs bring a lot of emotions.

“On my very first visit to a plantation, I was angry,” she said. But Wilson and her cousin returned to the plantation do research, to learn about her ancestors and her history.

“You go through a lot of emotions visiting a plantation, walking in the same steps as your ancestors. It can be eerie. It can be exhilarating,” Wilson said.

Her family has been deeply rooted in St. Mary’s and Charles County for a long time. Wilson has lived in southern Maryland her entire life, except when she served in the Air Force for a decade. A lot of the surnames in her family tree appear on the GU272 list.

“I’m sure at some point I will make a connection from my family tree to the list,” Wilson said. 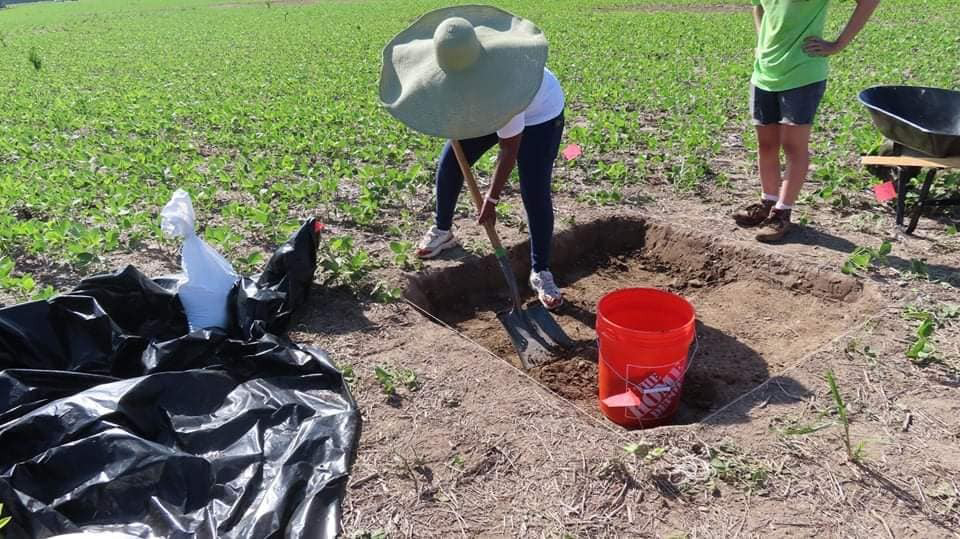 Vickie White Nelson’s family is formerly Catholic and now Methodist. She wants the Jesuit order to share information that the descendants need to piece together their own history. “They should let us have access to records to learn about our ancestors,” Nelson said, “so we can see who we’re actually connected to.”

Nelson has a hard time understanding how religious leaders could treat fellow human beings so poorly.

“I could not believe that a priest would enslave anyone,” she said. “If they did, I would imagine the enslaved would have been treated better. But they were no better off than if they had just had a regular old slave master.” 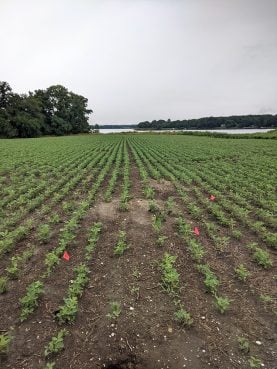 Flags mark areas in a field during an archaeological dig at a former plantation in St. Inigoes, in southern Maryland. Photo by Ken Homan, SJ

Masur said it has been difficult to get the Jesuit community interested and involved in the work of retelling this part of their past.

“Particularly among an older generation of Jesuits, it’s a history that’s already written to them. It’s a strict narrative, and they don’t want to think about changing that narrative at all.”

But there is one Jesuit, Ken Homan, who has been working with Masur and the crew on the dig for the past two weeks. He’s still in training and hasn’t yet taken final vows in the Jesuit order.

He’s not a priest, but a brother — a member of the Jesuit order who takes vows but doesn’t receive ordination. Homan said Jesuit brothers have often been involved in blue-collar work and manual labor. Homan learned the brothers were more involved with the day-to-day operations of the plantations — and were probably responsible for the abuse of the enslaved workers.

“The brothers were in charge of punishment, in part, because you didn’t want to despoil the priests’ hands,” Homan said.

Grappling with the wounds his order caused pushes Homan to work for justice in the present. “It gives me an impetus to ask ‘how do I foster justice?’ so that when other people experience church, it is one of belonging,” Homan said.

Masur sees Homan’s presence as a potential for a deeper collaboration with the order. “Working with Ken is a starting point,” Masur said. She hopes other Jesuits will participate in the archaeological work in the future.

Masur and Lenik have another dig planned at the nearby former Bohemia plantation. But Masur said they have just scratched the surface of St. Inigoes. “There’s so much. I could spend 10 years digging at this site,” she said.

“If there was just a million-dollar grant,” Lenik said, “that would really make a difference.” 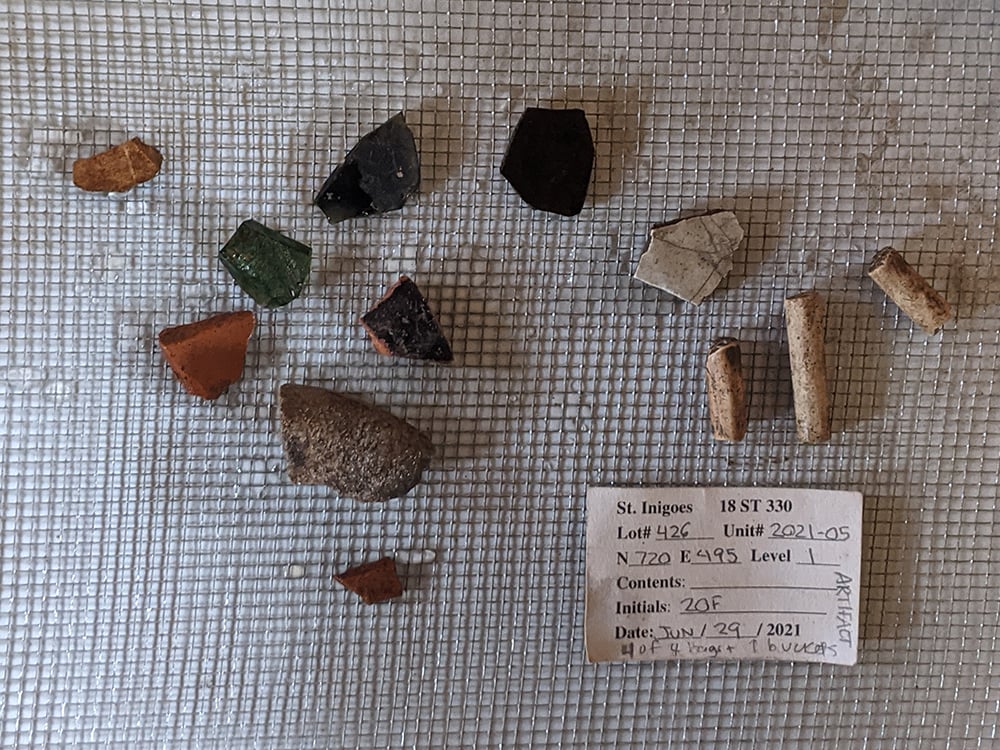 Angela Wilson believes reparations are in order for the descendants of GU272, without question. But for her, the experience of accessing history is a chance to get back to something deeply human, a chance to see the conditions her ancestors lived and worked in — and the incomparable feats they accomplished.

“What they actually did was build America,” Wilson said. To see where they labored brings her a sense of rootedness and connection. “It gives you a feeling of peace you didn’t even know was missing. It’s not just about Black or white — it’s about yourself.”