LONDON (RNS) — As the American Catholic bishops debate whether President Joe Biden should receive Holy Communion given his support for abortion rights, outrage has been building in the United Kingdom since the country’s chief executive, Prime Minister Boris Johnson, recently came out as Catholic, to the concern of British Catholics, some parish priests and parliamentarians.

The controversy began when it came to light that the twice divorced Johnson was allowed to wed Carrie Symonds, his longtime girlfriend and the mother of his baby, Wilfred, in Westminster Cathedral, Catholicism’s London headquarters, on May 29.

Biden has been known as a lifelong Mass-goer — he recently attended Mass in the parish church of St. Ives, the little seaside town next to the venue for the G-7 summit in Cornwall — but Johnson has not. Now, though, it seems that for the first time, the chief politicians on either side of the Atlantic are both Catholic.

RELATED: Survey: UK teens are more likely than millennials to believe in God

Baptized into the Catholic faith of his mother, Johnson appeared to move away from it in his youth, being instead confirmed an Anglican at Eton. His first two marriages were civil ones — both invalid in the Catholic Church’s view, which allowed him to marry for the third time in a Catholic ceremony — and there was little indication until he popped out of the cathedral that he was committed to the Catholic faith.

In retrospect, there were signs. In September, for instance, Wilfred was baptized as a Catholic. But it was only after Johnson and Symonds were married that the Diocese of Westminster declared that both were baptized Catholics and parishioners of the cathedral. For the very first time, it seemed, the U.K. has a Catholic prime minister. 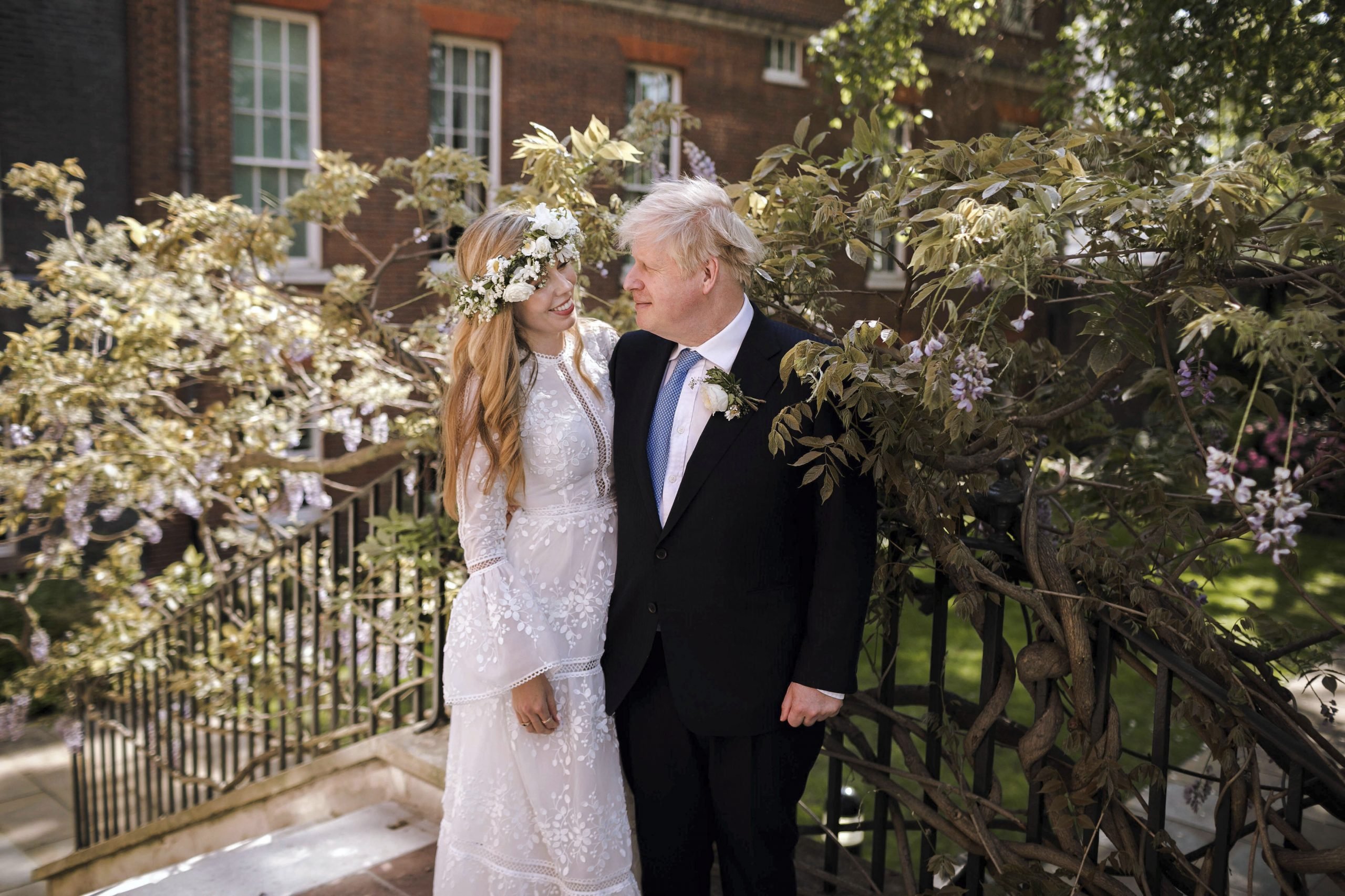 In this image released May 30, 2021, by Rebecca Fulton, Britain’s Prime Minister Boris Johnson and Carrie Johnson pose together for a photo in the garden of No. 10 Downing St. after their wedding the day before. (Rebecca Fulton via AP)

According to the constitutional expert Peter Hennessy, professor of contemporary history at Queen Mary, University of London, and himself a Catholic, having a Catholic prime minister in Downing Street is a watershed moment after hundreds of years of post-Reformation discrimination in Britain. In the 20th and 21st centuries, said Hennessy, Catholics have edged their way into positions of influence, being appointed as Cabinet secretary, director–general of the BBC and as the heads of Oxbridge colleges.

“Appointment as prime minister is the completion of the Catholic stealth minority’s rise to influence,” said Hennessy.

The U.K. may look to have religion at the heart of its public life — the Church of England is the established church, with its bishops sitting in the House of Lords and Queen Elizabeth II at its head. But Britain is also among the world’s most secular countries, where increasing numbers of its citizens have no faith at all, even as members of other religions, including Islam, Judaism, Sikhism and Buddhism, become ever more prominent, and vocal.

Roman Catholicism alone still has a contested place in Britain: By law, the monarch cannot be a Roman Catholic (although other members of the family can belong to the church). And the implications of a Catholic in the country’s highest elected office are still considerable.

To take one example, the prime minister plays a role in the appointment of Church of England bishops. Under the Roman Catholic Relief Act of 1829, no “person professing the Roman Catholic religion” is allowed to advise the monarch on the appointment of Church of England bishops. A Muslim or Jew can — but not a Catholic. It looks likely that Johnson will deputize the Lord Chancellor, Robert Buckland, on this matter. 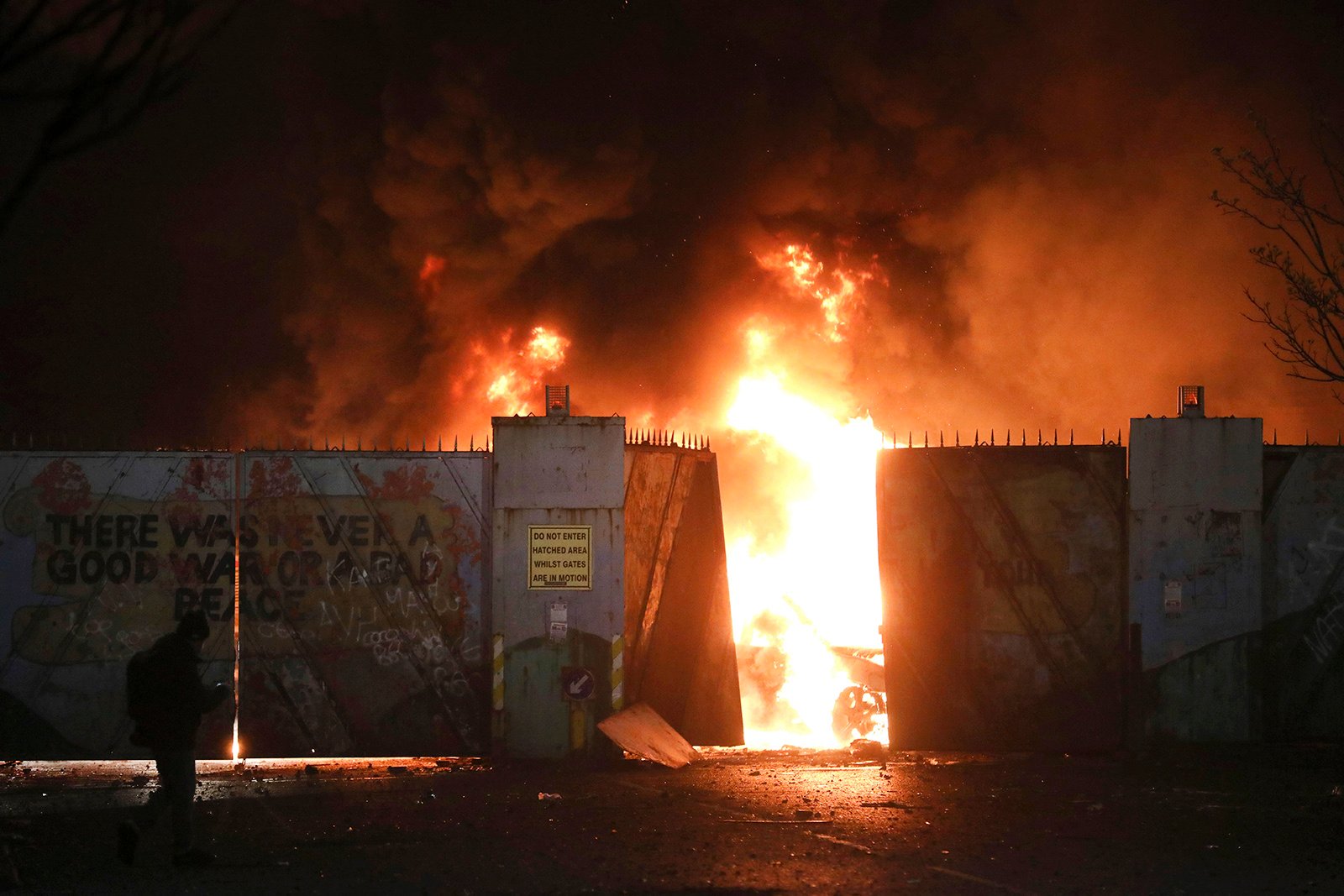 Hijacked cars burn at the peace wall on Lanark Way as rioting broke out in West Belfast, Northern Ireland, on April 7, 2021. Police had to close roads into the nearby Protestant area as crowds from each divide, Nationalists and Loyalists, attacked each other. The chaotic scenes during a week of violence on the streets of Northern Ireland have stirred memories of decades of Catholic-Protestant conflict, known as “The Troubles.” A 1998 peace deal ended large-scale violence but did not resolve Northern Ireland’s deep-rooted tensions. (AP Photo/Peter Morrison)

Johnson’s faith could also affect the future of Northern Ireland. When Tony Blair delayed converting to Roman Catholicism — the religion of his wife, Cherie, and their four children — until he left office, the appointment of bishops was a factor, but even more so was how a Catholic PM might be received in Northern Ireland, where the 1998 Good Friday Agreement had finally achieved peace between nationalists and unionists who are split along Catholic-Protestant lines.

Today, after more than 20 years of peace, Northern Ireland is again in turmoil as the reality of Brexit hit. Johnson’s deal with the European Union to avoid the return of a “hard” trade border on the island of Ireland has outraged unionists who feel the deal compromises the island’s links to the United Kingdom. At a rally earlier this month in Northern Ireland, hundreds of unionists in paramilitary-style clothing accused Johnson of betraying them.

If tensions increase over Brexit, said Steve Richards, a British political commentator and author of “The Prime Ministers: Reflections on Leadership from Wilson to Johnson,” “the perceptions about him and the mistrust could grow. The issue of his Catholicism could play into that.”

Even Conservative Party allies of the mercurial Johnson were taken aback by his ability to persuade the Catholic Church that he was returning to their fold to get married.

“Tories I spoke to remarked on his chutzpah,” said Richards. “It’s very Boris. They saw it as a contrivance. Its greatest political implication will be if it unravels, and then there’s a question about his ability to stick at something.”

At the recent G-7 summit, while Biden found time to head to Mass on the Sunday of the meeting, Johnson did not, preferring to go for a swim in the nearby Celtic Sea. “They wonder if the wool was pulled over priests’ eyes,” Richards added. When a TV political interviewer asked Johnson at the end of the G-7 gathering whether he is now a practicing Catholic, Johnson answered, “I don’t discuss these deep issues.”

In saying that, he was following in the footsteps of many recent prime ministers. Asked on the eve of the Iraq War in 2003 if he prayed with then-President George W. Bush, Blair looked highly embarrassed, shifted in his seat and eventually answered no.

Since then, however, Blair’s informal “we don’t do God” policy has waned, as prime ministers and their advisers see the potential for reaching faithful voters. Johnson has appointed a faith engagement adviser to produce a report on how government might better engage with faith groups. Church organizations and other bodies have been recognized by politicians as working effectively on homelessness and substance abuse problems.

But unlike in the U.S., matters of personal morality, such as abortion, do not play powerfully in the British public arena. If he is asked about it, look for Johnson to be taking another dip in the sea.